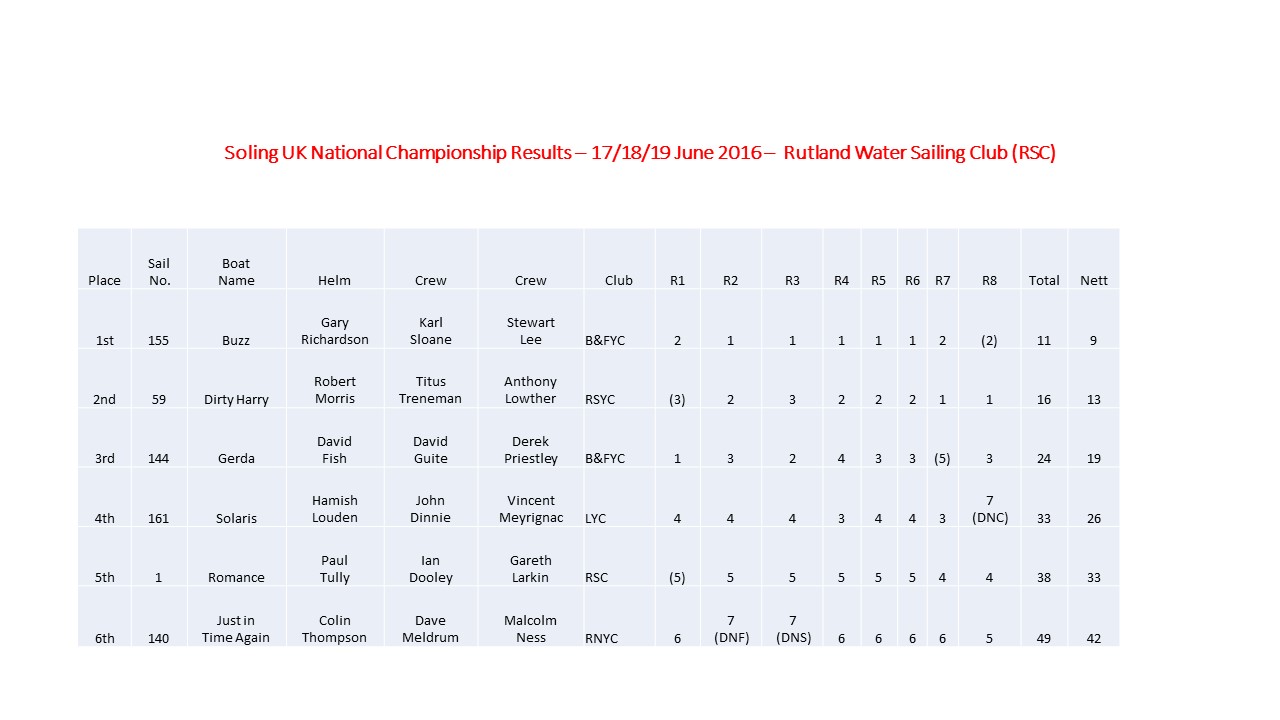 Six Solings competed in the 2016 Soling National Championships in breezes averaging at about 10 knots with a bit of a dip on Sunday morning. The Race Officer Ian Sumner and his team supplied excellent courses, sometimes in shifting wind conditions. When required Ian’s team made quick decisions to alter the course and the mark layer, Malcom McGregor, made swift mark movements maintaining the momentum of the event.

Competitors included was Gary Richardson who arranged his holidays to return from Darwin, Australia to bring BUZZ, GBR 155 from Blackpool and Fleetwood Yacht Club (B&FYC) to compete with his crew Karl Sloane and Stewart Lee. Also from B&FYC were David Fish, David Guite and Derek Priestley sailing GERDA, GBR 144.

Hamish Louden travelled all the way from Fort William on his own with SOLARIS, GBR 161 to team up with Vincent Meyrignac from Yacht Club Canet-en-Roussillon of France and John Dinnie from Shipton on Stour.  Vincent Meyrignac was part of Lionel Vidal’s crew from Perpignan in France who came to compete last year in DIRTY HARRY.

Colin Thompson came from Royal Northumberland Yacht Club in Blythe with Dave Meldrum and Malcolm Ness with the boat JUST IN TIME AGAIN, GBR 140 which he recently purchased from Martin Bowmer of the fleet in Barry, South Wales. It had been called Marsala Mags. Colin has only recently returned to the Soling fleet after being away twenty-eight years.

As part of the BSA’s efforts to attract younger sailors, Peter Bell of RSC generously made his boat DIRTY HARRY (registered at GBR129) available for the use of young sailors interested in competing. The Rutland fleet offered the boat to someone who had already shown an interest in Solings.  Paul Tully lent his sails from his boat O SOLIN’ MIO so DIRTY HARRY sailed as GBR59. The BSA also put up a new trophy for The British National Championships, The Young Sailors Trophy for the best placed young helm/crew.

Messrs Morris, Treneman and Lowther in DIRTY HARRY, GBR 59 were a real unknown quantity in the regatta.  Could they get the boat operating effectively and learn its quirks quickly enough to be a real threat?

While Messrs Fish, Priestley, Guite won the first race on Friday morning in GERDA, Messrs Richardson, Sloane and Lee were close behind coming in second with BUZZ. The boys from Southampton University in DIRTY HARRY came in third showing that they indeed were a threat. Messrs Loudon, Dinnie and Meyrignac in SOLARIS came in fourth.

In the second race of Friday afternoon Messrs Richardson, Sloane and Stewart got another first while GERDA and DIRTY HARRY swopped places coming second and third followed by SOLARIS.

Gary Richardson and his crew in BUZZ dominated racing on Saturday take a first on all three races while the young team from Southampton University took second place in each.

At the start of the first race on Sunday the Southampton crew in DIRTY HARRY forced BUZZ the wrong side of the committee boat while Hamish Loudon with John Dinnie and Vincent Meyrignac in SOLARIS were over the line and had to restart. DIRTY HARRY took a first and in spite of the bad start Gary Richardson and crew in BUZZ came second.

Having mastered DIRTY HARRY, the Southampton crew took a first in the final race with BUZZ close behind.

The prizes were as follows:

Winner of First Race of the Regatta 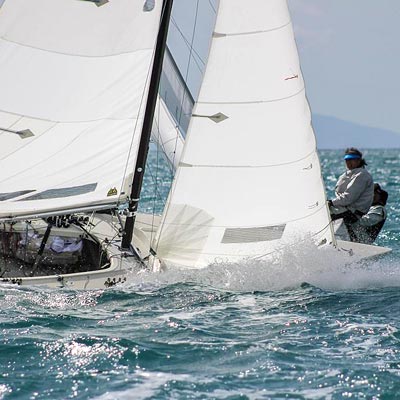